Okay so these guys weren’t there…shocking! I think Ocean’s 11 is one of my favorite movies. Yes, I know totally implausible which was hammered home while I was in Vegas. Still it is immensely entertaining, so it should be no surprise that I headed off for the Bellagio after checking into my hotel. We stayed at the Stratosphere, much nicer than some of the reviews I read, for $53 bucks a night you can’t beat it. The only problem is that it is on the way North end of the strip. I spent a lot of time on the monorail going back and forth. So off I go, the independent explorer as Mary Kay didn’t arrive until the next day. I was a girl on a mission! Recreate the ending of the movie for myself. And I was not disappointed…I arrived at the front of the Bellagio just as the sun was setting. Unlike the movie I was one in about a thousand people watching, but I still got a great photo spot. Too bad my camera is really night photo challenged. As you stand there you can see the mechanisms start to rise out of the water and before you know it the music has begun and the mist is rolling off the ‘lake’. You can feel the cool air and slight mist on your face — so refreshing for Vegas.

There is something so mystical about water…soothing and energizing at the same moment. From the misty start the fountains burst out of the water, you can’t help but be mesmerized by the movement. 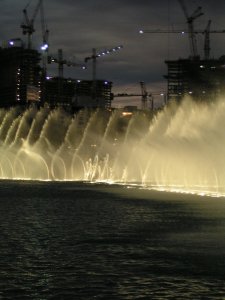 5 minutes later, just as it began the fountains sink into the water and the lake is still again. This was definitely one of the highlights of the trip, I dragged MK back after a long day at the show on Monday night just to see it again.

I just took a short break from the craziness at work to head off to Vegas for the Memory Trends show in Vegas. But before I took off for Sin City, I spent a little time with my parents as they were in town for their quarterly ‘Spoil the Grand Children Visit’. Next to spoiling grandchildren, I think my dad’s favorite thing to do is shop. Now that Shelley and Troy are expecting they get to be part of the fun and dad has an excuse to do his favorite things at the same time. The day started with a trip to Babies R’ Us…it was Shell’s first look at the world of baby stuff. I love the look on her face in this pic as she takes it all in and Dad gives his stroller recommendations. 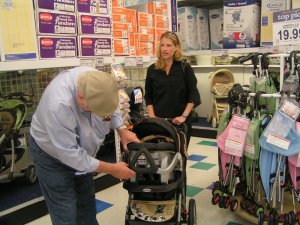 Of course no stroller purchase can be made with a test run. So off they go, having stroller races around the store as mom and I watched and tried to keep other shoppers safe.

After the stroller choice was a traveling crib set and the ever important swing. Finally a trip wouldn’t be complete without picking out a few outfits…make that a few wardrobes when Dad’s at the helm. Sadly, I had to leave them after a quick lunch at Cheesecake Factory. Tanner needed shots before he could go to Camp BowWow while I was in Vegas and then the parents were off to the Pueblo kids.

I just downloaded my Vegas pics tonight a whopping 80 pics for 4 days…I’ll try and pick out my favorites and share them over the next few days. Man, Vegas has changed since the last time I was there about 10 years ago. I actually enjoyed the city much more than I was expecting too.

Even though work has been super crazy, to keep balance I’ve been trying to do something creative as often as possible. Here’s some of my most recent work… 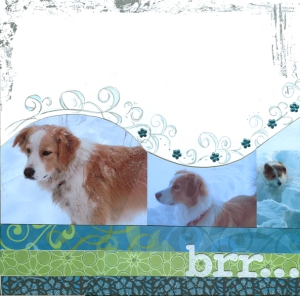 saw a quick blurb about this on the news last night.

Consumers, not just factory workers, may be in danger from fumes from buttery flavoring in microwave popcorn, according to a warning letter to federal regulators from a doctor at a leading lung research hospital.

A pulmonary specialist at Denver’s National Jewish Medical and Research Center has written to federal agencies to say doctors there believe they have the first case of a consumer who developed lung disease from the fumes of microwaving popcorn several times a day for years.
“We cannot be sure that this patient’s exposure to butter flavored microwave popcorn from daily heavy preparation has caused his lung disease,” cautioned Dr. Cecile Rose. “However, we have no other plausible explanation.”

The July letter, made public Tuesday by a public health policy blog, refers to a potentially fatal disease commonly called popcorn lung that has been the subject of lawsuits by hundreds of workers at food factories exposed to chemicals used for flavoring.

In response to Rose’s finding, the Flavor and Extract Manufacturers Association issued a statement Tuesday recommending that its members reduce “to the extent possible” the amount of diacetyl in butter flavorings they make. It noted that diacetyl is approved for use in flavors by the federal Food and Drug Administration.

One national popcorn manufacturer, Weaver Popcorn Co. of Indianapolis, said last week it would replace the butter flavoring ingredient because of consumer concern. Congress has also been debating new safety measures for workers in food processing plants exposed to diacetyl.
The FDA said in an e-mail it is evaluating Rose’s letter and “carefully considering the safety and regulatory issues it raises.”

Fred Blosser, spokesman for the National Institute for Occupational Safety and Health, said it is the first case the institute has seen of lung disease apparently linked to popcorn fumes outside the workplace.

The occupational safety arm of the Centers for Disease Control and Prevention said it is working on a response to the letter.

William Allstetter, spokesman for National Jewish Medical, confirmed the letter was sent by Rose, a specialist in occupational and environmental lung diseases and director of the hospital’s Occupational and Environmental Medicine Clinic.

“There have been no other cases that we know of other than the industrial occupational ones,” Allstetter said.

Rose acknowledged in the letter that it is difficult to confirm through one case that popping buttered microwave popcorn at home can cause lung disease.

However, she said she wanted to alert regulators of the potential public health implications.
Rose said the ailing patient, a man whom she wouldn’t identify, consumed “several bags of extra butter flavored microwave popcorn” every day for several years.

He described progressively worsening respiratory symptoms of coughing and shortness of breath. Tests found his ability to exhale was deteriorating, Rose said, although his condition seemed to stabilize after he quit using microwave popcorn.

She said her staff measured airborne levels of diacetyl in the patient’s home when he cooked the popcorn. The levels were “similar to those reported in the microwave oven exhaust area” at the quality assurance unit of the popcorn plant where the affected employees worked, she said.
David Michaels, of the George Washington University School of Public Health, who first published Rose’s letter on his blog, The Pump Handle, said the finding is another reason for federal regulators to crack down on diacetyl exposure by workers and consumers.

Life is starting to get back to normal, I don’t anticipate any more 12 hour work days, at least I hope not.

I was thinking this morning that I have been back in Colorado 1 year today. Time marches on so quickly as an adult, it’s hard to keep up sometimes. New location, new life? Not so much…

The biggest difference is that I have a more positive outlook on life, I still get sad and scared that if I start crying I won’t be able to stop, but I do and I move on.

Filed under All About Me