The iBook G4 gets pimped

I know the day is coming when my vintage iBook will give up completely and I’ll have to get a new computer for home. I’ve been saving, slowly but surely but still have a long way to go before a new macbook is in reach. I started to panic last week when my frayed power cord finally gave up and with a battery that held less than two minutes charge I thought I might have to make different plans (a cheaper PC perhaps). My Mac is over 5 years old and I thought the chances of a new battery slim to none. But with slim hopes I headed out to my local Apple store with no genius bar reservation (dead computers have trouble getting online, you know).
After waiting a bit(in fairness they unlocked there doors early and let people in before they were fully staffed) I got help from not a ‘genius’, but a knowledgeable ‘specialist’ none the less. He welcomed my baby with open arms. (as opposed to the OMG, look how old this thing is I was really expecting) And to my surprise actually had a battery and power cord in stock. Yippee! Now, I can once again blog hop in my bed with out worrying that I will fall asleep and the cord will strangle me in my sleep (I wonder if that’s how it got so frayed in the first place). 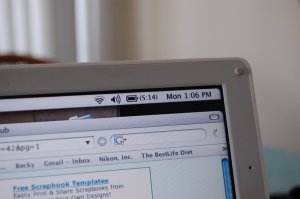 But my friendly specialist went one step further, when he noticed that the ‘P’ was missing from my keyboard. It has been for about 2 years, something happened in the move I think. Quite frankly, I’ve gotten so used to hitting the under key that I don’t think about it that much. He and another helpful gal set out on a mission to find a new P, when none of the white keys they had seemed to work, they moved on to different keys and finally found a silver P that was the perfect match. Now my book looks like a rapper with a grill.

The ‘special’ treatment didn’t stop there, they installed a new battery (I know, totally something I could have done, but…) and wiped down the entire think with Apple polish. Yay!
So while this baby still lacks a jungle cat version of OSX and a decent memory, I think she’ll last until I have enough money for this new friend I was drooling over while waiting. 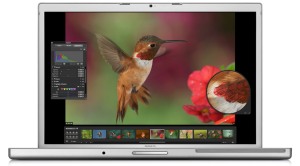 5 responses to “The iBook G4 gets pimped”